As has been my tradition since 2006, I just completed my election predictions
(not forecasts, predictions). This is the first time they’ve ever been publicized besides via text message. Just a note- in the past, I’ve overestimated Democratic performance, so there could be an unintentional bias toward Republicans as a control.

The popular vote will be a statistical tie (<1%) with the President edging out Governor Romney. Both will be at approximately 49%.

The President will win the Electoral College 277-261 with the election “tipping” with Ohio. 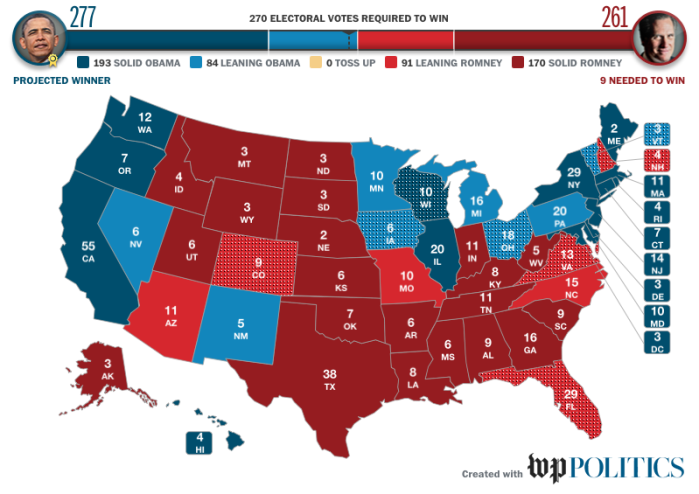 The Republicans blew (what seemed to be a year ago) a good chance at recapturing the Senate. The Democrats will control the Senate in the 113th Congress by a 52-48 margin with the Independents caucusing with the Democrats.

The Democrats will pick up House seats, but not as many as people think. The Republicans will maintain a 241-194 edge in the House.

Road trip with @lauraelizabethm to see the Texas Collection at @bayloruniversity (my great-uncle was a senior Cold War diplomat and his papers are there) and the @thebushcenter at @smudallas. October 9-10, 2015 #firstphotochallenge
❤️
Great morning with my friend @anasandovalsatx!
Celebrating Thanksgiving early with the Madison Square Child Development Center family
Great fall day with @lauraelizabethm, @tracy_winstead, @meredithcpowell and #MiniMayes.
Four years. Multiple moves and job changes. A wedding and the birth of a perfect child. Thousands of miles, a few more wrinkles, and lot more gray hair. Victories are sweeter and defeats are softer because we are in it together. I love you, @lauraelizabethm.
Her first basket #MiniMayes #latergram #summertime
Happy birthday to my mom, mentor and friend @tracy_winstead! We are so lucky to have you in our lives.
%d bloggers like this: